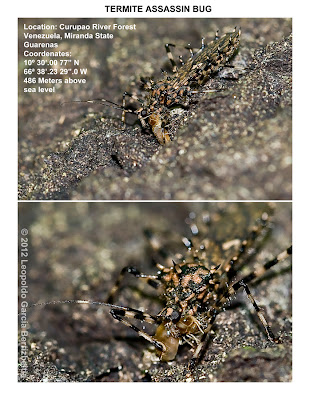 Great surprises come to curious photographers. A friend and I went on an image hunt at a gallery forest near the city of Caracas in Venezuela and after a short trek, we found a huge termite nest. I told him that these social insects are very industrious and they are very quick to detect and repair any damage that occurs to their nest. Just to prove my point, I made a small opening to the outer crust of the nest, and in seconds, the termite soldiers were at the opening. Soon after, great numbers or workers were doing their stuff. It was my experience, that they can detect the slightest change in temperature, light and humidity that occurs in their nest. Thus, we started to shoot a series of theses workers and soldiers working in consort. Suddenly, a creature that could come from your worst nightmare, one that would make a perfect subject for an alien movie, walked carefully to the hole's edge. It was an Assassin Bug, a hemipteran, however, nothing I had ever seen before. In a moment it stuck its proboscis to a worker termite. We could no believe our eyes! As it turns out, This bug, Salvayata variegata, made the news in the New York Times. The paper makes a report about a scientist that works on termites in Costa Rica wrote that the insect uses tools to capture its food. As it turns out, it picks corpses up with its proboscis and places them at the entrance of a termite nest, when another worker finds the dead termite, and prepares itself to dispose of the health hazard, the assassin lunges at it, sticking its tube like stiletto into its victim and sucks it dry, it may repeat the strategy up to 32 times, after which, it retires for a long siesta.

So we saw and photographed this 6 years ago, and now it made the headlines in a huge paper, but you can say you saw the pictures here!!!