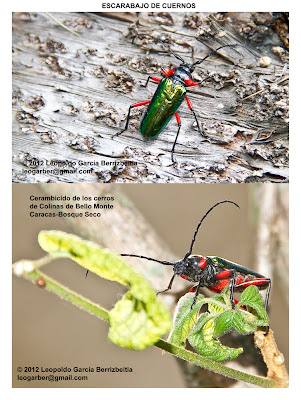 When an afternoon stroll becomes a discovery moment: It all started when my wife and I got out for an evening walk. Suddenly, she spotted a Long-horned Wood Boring Beetle (CERAMBICYD) upside down on the sidewalk. As I tried to help it, turn itself over, I noticed, I had never seen this beetle before!. So I picked it up, and placed it in my fanny pack, to take it home, shoot a few pictures, and release it, soon after. The sun was going down fast when we got home, however, I managed to do a small series of photos, and when I was done, it was getting dark fast. So I placed it on a leaf, and that was the end of the story. Or at least, I thought it was.

I ran the picts through Camera Raw, filed them, and selected two, to upload in two Facebook sites, that deal with Arthropods and Insects and Butterflies of Venezuela. As it turned out, the beetle was very rare, and most people know it from museum specimens! So most of my biologist Facebook friends were astonished with the find. I told them, I found it in a Caracas' suburb and they asked me if I had collected it. My reply was NO, I told them, that I find the creatures, take their pictures to document their existence and then, I let them go. Well, they told me that our museums of agricultural entomology have only one specimen, and that it was in poor shape. They said it was a rare beetle and it is seldom seen.They told me that if it was dying, I should keep it and donated it to the museum. That is how important this insect was to science. Well, I told them it would not fly, even after I helped it to walk. Then a venezuelan entomologist wrote us from California and told us it was diurnal. So, it would not be keen to fly in the dark. Most of them encouraged me, to verify what the beetle's condition was, but I had released it. They said, please try to find it. Thus, my curiosity got the best of me, so I've got a flashlight and placed everyone on HOLD ;-) whilst I searched in the dark for this insect.

I looked for the winged jewel and it was under a curled dry leaf, SLEEPING. I placed it , leaf and all inside a jar, and went back online. The suspense was heavy duty, but pro-lifers and collectors were equally happy. However, I had to come to a salomonic decision to make everyone happy, if it was alive in the morning, I would measure it and release it, if it was dying, I would let nature take its course and eventually send it to a museum. The night before, I made a screen capture of its locality from Google Earth. Then, I've got the coordinates from the place I collected it, and used PS to merge the pictures of the beetle and the locality together.

Early, the next day, some of my diehards entomology friends were up, and at 05:00, they asked me to see if the beetle was alive. IT WAS.  So I waited for the sun to warm up, so the beetle could get his metabolism up to par, and by then, everyone in the Facebook sites were in standby. Would it fly for freedom or end up in a museum. Read on... 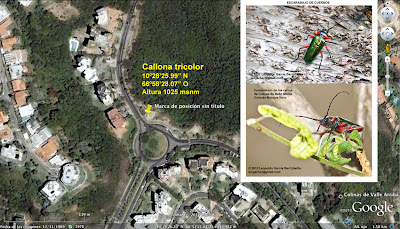 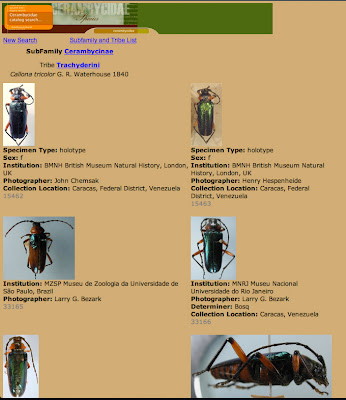 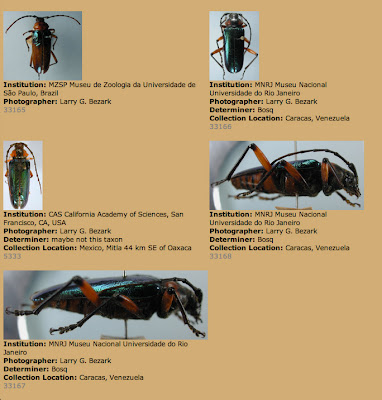 I went outside, placed the beetle on the branch and it climbed to the tip, looked around, spread it wing covers, and flew off. Now, our answers became clear.
It does not fly at night (It sleeps), it was no dying, and even tough it was not placed in a museum, we got great info by geotagging the picture, as I managed to pinpoint the exact location where it was found. It is not extinct, it may live in a tropical deciduous forest. It was found 1025 meters above sea level and it may have viable populations very close to human dwellings.

All of these tells us, that the left over vegetation, which was spared by urban development,  may give certain animal populations, enough space to survive. And all of this information could be achieved, from the geotagging metadata. 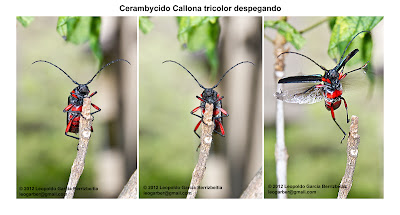 In short, geotagging is a very valuable tool, and for this Long-horned Beetle (Callona tricolor) and this nature photographer it was great to get together.
So, the more info you place in your pictures, the more value they get for other uses. As the controversy between collecting a living creature or letting it go free
The pictures are a good answer.

What do you think?

See you soon! and keep on clicking.

Fabulous anecdote and so happy the colorful beetle is out and about, maybe making babies. The photographs are superb and bravo for a very well told story.