KAZZ (KAZUHIRO TAKAHASHI) is the first international contributor to Digital Camera Adventures, as I write this, just before I hit the streets of Caracas to start my day, it is 21:13 or 09:13 at night in Japan. The sun rose in Venezuela as the moon is appearing in Japan, now, that is a great thing to experience.

Light, the object of most importance to all photographers, plays an important role y the life of people and Kazz's first contribution has to do with the night lights of Tokio. He is presenting his work on HDR. So his work takes us from the streets of Tokio, to the streets in his mind, where the colors of the night get his magic interpretation of life in the Japanese capital city is shown to us by one of its people.

I want to welcome Kazuhiro Takahashi and his work to the first international edition of Digital Camera Adventures. I hope that his enthusiasm becomes contagious and maybe, just maybe, more photographers/contributors help me brake the geographic and cultural barriers of our planet with images that will show us what you are doing when half of the world is sleeping. 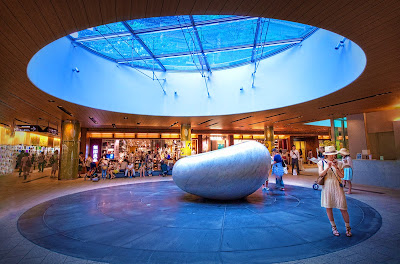 The Midtown Roppongi Hills area of Tokio is a sophisticated place in the city and the fusion between artistic architecture and utilitarian engeneering allow daylight to filter through a skylight into the underground mall. Kazz's HDR technique allowed us to see the link between the streets above and the mall's walkways bellow. Multiple points of attention leed our views to the lady in her pleated dress, the rock that accents an artistic expression and the hallways full of people. 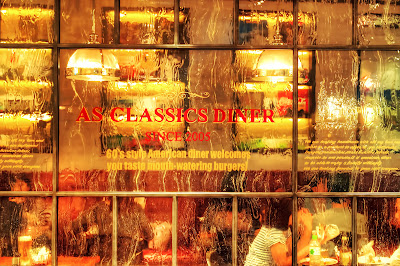 The Ropponi Hills Mori Tower is a landmark place in Tokio, as it is the fifth tallest skyscraper in Tokio. It is named after its builder Minoru Mori and his company headquaters share the building with Pokemon, Google Japan, Nokia, Goldman Sacks, the Barclays Bank and the Mori´s Art Museum. The Mori Tower brings to the area many people. Here Kazz shows us an etereal view of one of its restaurants. The photo could have been of any restaurant, but the photographer chose the glass window of a restaurant in the tower, where the glass allows a restrained view of the people, enhanced by the water that is running on its surface. 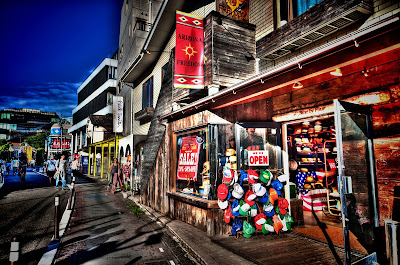 What you get when you have young people, a trendy street, great shops and no music????
Neko Street! As it turns out the street has no name, but the young people that use it as a hangout, noticed it was a feline paradise so they called it "Cat Street" hence Neko Street. And yes, unlike other fasionable streets in Tokio, this street is quiet, shop owners do not play loud music there. Kazz, likes to visit and catch its light and colors. 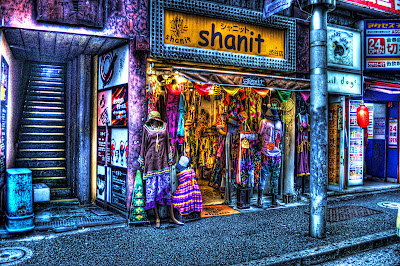 Kazz, favorite color is purple, this was a no brainer, time to stop, and freeze in time, the scene. HDR plus a little grundge in pos-processing did the rest. 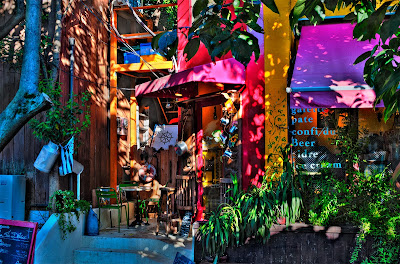 A tiny restaurant in the Shibuya Ward of Tokio, this is one of the most densely populated areas in Tokio, it has over 203.000 people living in less than a square mile of the city. Kazz was fascinated to find such a small restaurant in one of tokio's most busy districts. One could never tell from this image, that this many people live and work here. This is an image out of context,  as tranquility is seen in a fast moving area of town. The narrative helps the viewer understand the photographer's feeling. 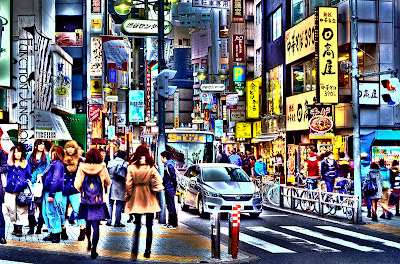 Here, Kazz is showing a regular evening picture of the Shibuya Ward. Neon lights, cars, lots of people is what most of the world would expect in a Tokio scene. The HDR just brings a bit of urban sense of fantasy to the image. 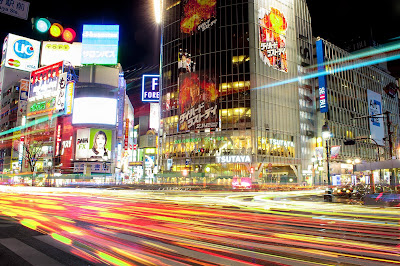 The Shibuya Crossing is analogous to Time Square in New York City, Trafalgar Square in London and the most bussy places in cities around the world. Slow shutter speed, long exposure, moving cars, and invisible people is the magic of knowing how to use light to express a fast moving city. People and cars are invisible because the slow shutter speed, however, Kazz nailed, one of the busiest places of Tokio, in a very artistic way. 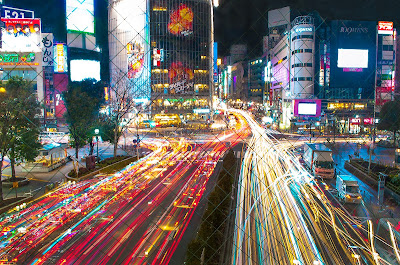 It is not what the original picture rendered, digital photography is about making a statement, making the place yours, and the digital darkroom is part of today's photographers, who try to take their images to a very special place. 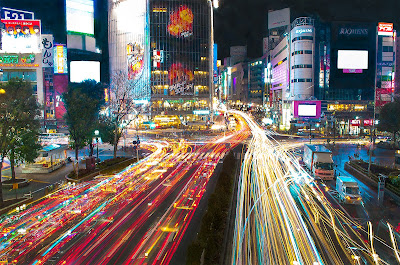 Four weeks of retouching made this posible, the wires are gone, each pixel was worked to its finest detail. Kazz determination is shown in this final result, his workflow gives us a great image where tenacity and dedication to his statement was beyond most photographers goals. 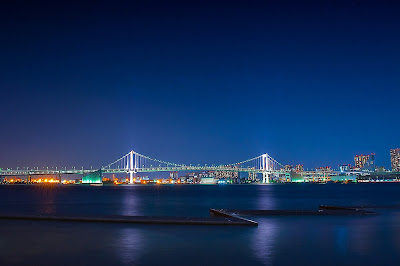 To finish off his presentation, Kazz shows us Tokio from far away. The Rainbow Bridge is a suspension structure that takes the people of Tokio to Odaiba the IT center for Japan. It was painted white so the red, white and green lights will give the rainbow color effect at night. The lights are powered by solar panels. The calmed waters give us a peaceful feeling which Kazz uses to say JA MATA (See you soon) when he will take us to another digital camera adeventure in his home town.

I like to thank Kazuhiro Takahashi for becoming the first Japanese contributor of Digital Camera Adventures Domo Arigato Takahashi San.

Hope to see you soon.