Pro Bono work means working for the good of the public, however, it is implicit, within these words, that one works for free! Some may say... what's in for me?

Is an altruistic deed, really justifiable, in the doggy dog world we live in. Well, if it is tax deductible it may be, however, this may not be true in many countries, where tax deductions do not do exist. So how can photographers get some fringe benefits out of pro bono work? 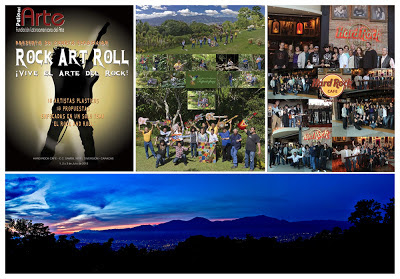 Let me make you a short list of my afterthoughts:

A friend of ours asked me, if I could help them do a photoshoot of 18 venezuelan painters at Jardines Ecológicos Topotepuy, a private botanical garden in Caracas, Venezuela. Why? well, I am the staff photographer and JET is eager to help NGOs and entrepeneurs get public recognition as part of its social responsibility endeauvours.

I spoke to the owners, and they granted us permition to use their wonderful place, for the shoot of the budding artists and their guitars. As it turned out, The Hard Rock Cafe was so thrilled, that theme was Rock N' Roll that they became the indoors gallery for a month as well! 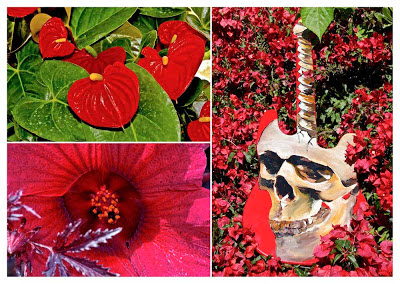 My idea was to incorporate the guitar shaped paintings as part of the garden, hell, as member of the class of 69, I couldn´t do less. The skull painted guitar remainded me of the Greatful Dead and after I found the red boungavilla cluster, it really went well among them. We were up to a good start. 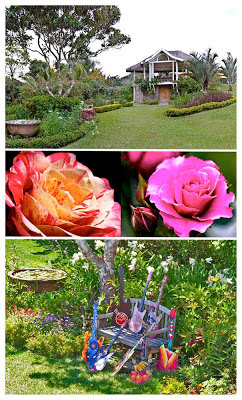 The live gallery concept of a botanical garden worked as a perfect backdrop for the guitars as each exhibit is a cluster of plants with unique characteristics as far as structure, colors and shapes of leafs and blooms and locations. Thus, allowing, each painter and the photographer, a wealth of choices to work with as sets.

In a shoot like this, the photographer has to work with a branding challange, as each artist needed to appear both as a part of the group and as an individual. As a group they represented the Latin American Foundation of Art, however, as individuals, each of them was a brand, consequently, each had their own history and media use, and most of them wanted to have a different set for their picture. 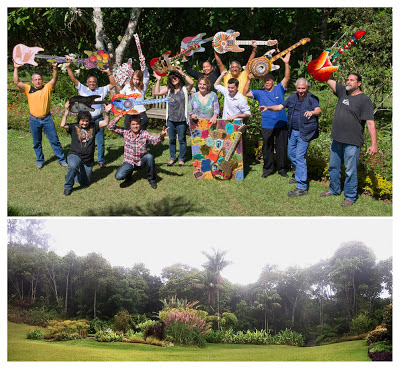 The solution was to talk to the individual artists, get a feeling of their artistic expression, ask them where did they envision themselves whithin the grounds, choose the site, and hope that all worked well.

Mind you, that 18 pictures, could be 18 thumbs up or 18 thumbs down, and in pro bono jobs, a bad reference is as bad as in a paid gig, as future clients may think, well... it was for free, so you get what you are paying for! That is something to evaluate, when one choses the job. As a contract photographer, I had to place Jardines Ecológicos Topotepuy (my place of work) in the minds of the viewers and the artists. 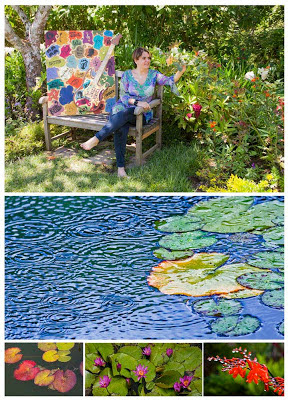 As the botanical garden is constantly evolving, it was of upmost importance to have a good mix between the old exhibits and the new ones. 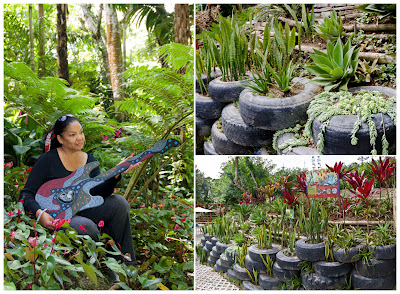 I am believe that good rock never dies, and most of the artist where young during the late 60s and the 70s. So Art, music and nature became a rich theme to work with. As sustainability is fashionable and almost a fad these days, recycling was something important to show. Topotepuy's recicled tires xerophitic and butterfly gardens came out very strong, it seemed as a scene from a Whole Earth Catalog's pages, the Google like, most have catalog of the hip generation (Steve Jobs included). 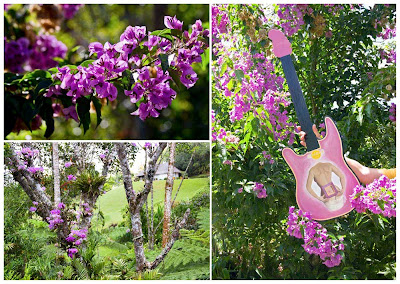 As one of my jobs at the botanical garden is to keep a photographic record of blooms and vegetation changes (the phenology of the place). I´ve been keeping record of the changes in the gardens, and the EXIF data, allows me, to keep up to the hour information of these events. In fact, I strongly recomend making photos of the same place regularly as an exercise to learn the changes in light and the time the lighting conditions are most favorable. It is a fabulous learning technique. So when a pink colored guitar came up, boungainvilleas and orchids blooms worked well with the art work. Praise nature for its favorable work! 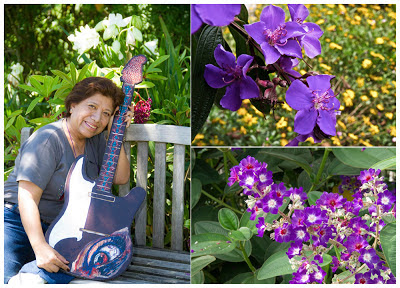 Some artist were shy or quiet, however their passion, was no to be underestimated. This was Blanca's way, subtled and kind. I found out later, that a hug and a thank you, was a wonderful reward. All I had to do was to ask...what is your favorite color, the rest was up to the tibouchinas' blooms to help me get through. Ask, ask and ask away, this is as important, as knowing when to click away a specific scene. 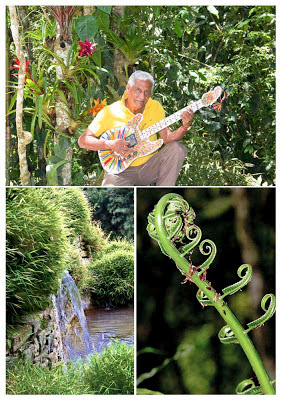 Dealing with dilemmas: The artist and his work - over the work of the artist. Standing out with one's work was the key for Enrique, who has devoted his life to the use of color pencils to be the object of his artwork. I told him, that nature mimicked man's  work, and tree ferns started this 450 million years ago, with fronds that resembled the keys of a violing, he was pleased with the photo choice, and so was I. 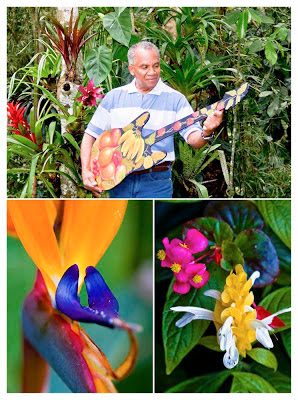 Eliecer had a tropical flavour for rock, kind of a Jimmy Buffet ´s IF YOU LIKE PIÑA COLADAS view of music. So the forest and colorful flowers had to play an important role for his picture. He was pleased with his making, and nature had plenty tropical colors to help us work. 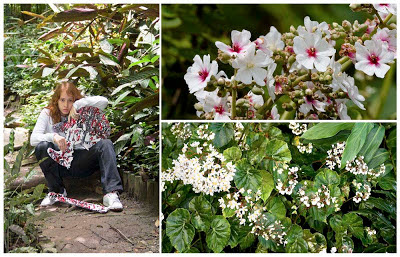 Now, Marielina had me completly off my tracks, Her theme was a broken guitar! Just thinking about it, made me heartbroken. I knew that a broken instrument cannot be replaced. However, was I in for a jaw droping surprice. As it turned out, Peter Townsend, of The Who, was the first rock artist to break a guitar on stage. Now, a piece of that first dead guitar may buy you a bunch of brand new ones. To Marielina, her broken guitar ment the ecstatic end of the concert, and I was all concerned about a broken instrument. She showed me, not to make assumtions. However, she liked her picture, as her sad face was not about a broken guitar. Live and learn. 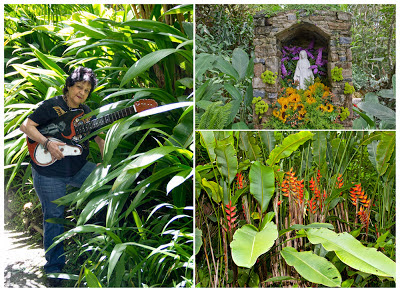 Diana loved heliconias, however, the heliconia exhibit was too far up hill, for her to pose. We searched for a better place, and low and behold, we came up a small shrine of the Virgin Mary. Diana just came out of a life threatening event and she was devoted to the Virgin Mary. She asked me to leave her alone at the shrine and return later. About half hour later, I returned and she said that she wanted her picture in the shrine's trail. This made her very happy and I would have never chosen the place for her set. So, developing bonds with your clients works. She told me, that some times, unperceived beauty is stronger than bright colors. This was a lesson well learned. 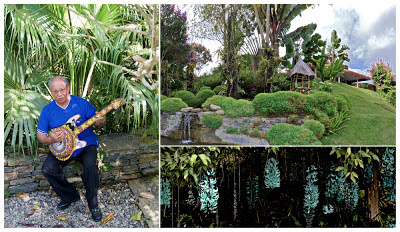 The most senior person among the artist's group could not walk up and down the garden's hills. He prefered to have his picture taken as close to the road as possible. So the Oriental Garden and the fabulous Jade Flower Vine were the chosen images to complement his picture. 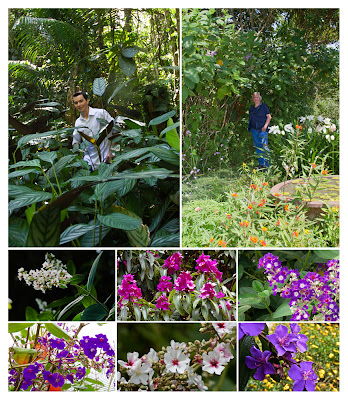 Some artists did not work with the guitar themes, their work was on canvas. Their work was at the Hard Rock Cafe so we had to workout a photo with them as nature lovers. One chose a picture in the cloud forest understory and the other in the Rose Garden. It brings one up the past as I NEVER PROMISED YOU A ROSE GARDEN was the theme song of a touching movie I saw writen by Joe South and recorded by Lynn Anderson in the 70s. So, the shoot was a path through memory lane and a challenge to share with you. At the end all of them were happy and they were delighted to pose for the panoramic view of Caracas, that has becomed an iconic image taken from Jardines Ecologicos Topotepuy. 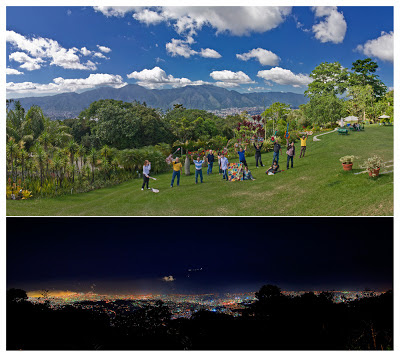 1) Talking to your client about a location over the phone, or face to face in an office, may not be enough to make a successful shoot. Knowing the location is a most, research it, work it and if you can do a scouting of the place first.

2) Once you are in a new location look hard into CONTEXT  AND OBJET. It is very important to develope your awareness about things huge and little as they are critical parts to a story. The set is a mix of a bunch of things working together for a particular event. However, there are sets within sets, and details are of making or breaking importance.

3) Make suggestions to the producers and let them run the show by taking them to your predetermined places of choise. Making the producers life easy is a very important part of your work. Look at it as a win-win situation. Make them love your set, and allow them to be the heros of the shoot, as your work will printed for many to see, and that is a great reward. However, when a producer looks for "the photographer", she/he will remember the one that made them a success, and this is priceless.

4) Talk to the people, models, clients about their feelings for the shoot. What they love and what they hate is very important. Most people have good and bad sides, and in photography, I have learned, that a lot of people say please take the picture from this side (they like the way the look from that position) as it is the pose that suits them best. This may sound as a metaphor, however, it is better to get on the right side of moods, personalities and feelings to get a smooth and  relaxed flow of things while you work. Pressure and time are great foes to deal with and getting by these things is not easy. So ask to please and they will love you.

5) Make sure you give out business cards, they are the cheapest form of advertising.

6) Try to use the shoot to increase your files. You never know when they will make you money.

I hope you enjoy this article, and we'll se you soon.

Love that photo of the purple guitar with the flowers!