Hello, this is the first post in a series, that I will name DESTINATIONS, which aims
to promote the work order, that I use, while freelancing for life styles, travel and nature magazines.

I know, that most of my bilingual readers may think, that all I need to do is to translate my spanish publication, but this is not so. Different audiences require
different content. However, most of the spanish version will be translated for this article, I will leave out, some content that pertains to our idiosyncrasy, and place an effort to make this article more worldly.

Geography is a very important subject for planning. It seems that GEOTAGGING is becoming such an important issue, that camera makers are including GPS enabled cameras in their inventories. Thus, if one finds that a locality's coordinates are an important part of our new metadata, and most stock and press agencies are finding the importance of geotagging pictures. It seems to me that knowing the most about your locations' whereabouts, is a most, to plan a shoot adequately. 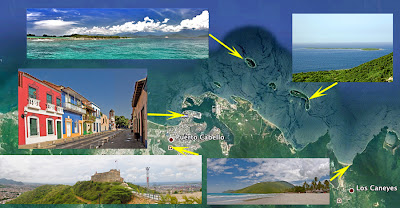 Venezuela lies on northern South America and most of its coast is located on the south Caribbean. It is, without a doubt, a tropical country. Puerto Cabello, is a port city located on the central coast of the country in Carabobo State. Most of its southern geography is dominated by the Coastal Cordillera and the coastal plains are narrow and in some cases absent due to the insertion of the mountains into the sea. The region's towns are connected by paved and dirt roads, and in some cases, one most use boats to get from one place to the other. As a port town, most commercial  activities have to do with the shipping industry, however there is an incipient effort to diversify its economy with tourism. This was where my research was placed.

As a freelancer, self appointed assignments are a tricky thing to do. If you do some work for archival purposes, and then, try to find an editorial client, you may find yourself spending time and money at the wrong place. However, if you made a proposal to a magazine and they have made a commitment to publish your article and pictures, then, you are in a good starting point to work for an article and make an effort to increase your archives. Once, the publishing factors are insured, planning most make things work. And if you are in a tight budget, Murphy, post be taking into account, as preventing loss of time and contingencies will either make or brake you . So Google Earth becomes a very important tool to work with. If you look at the first picture, you will be able to see, the city, port, beaches and coral reef islands. That is your SET. 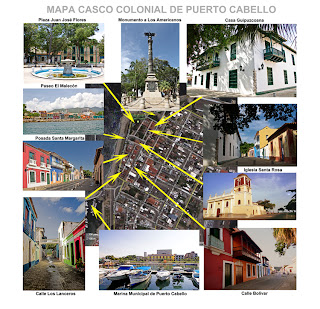 I placed some pictures, of the most important icons, at the Colonial Center of the port, to show you just another use of Google, GOOGLE MAPS. Both views of the region will help the photographer plan: Logistics, housing, light availability, times of each shoot, permits request (where they are needed), a so forth.

Once the research is done, it is advisable to do a pre-shoot scouting, however, that may place you out of the budget, so one most make the best out of the information one has, in order to get the pictures that will secure your job. I use the following strategy: Outdoor shoots between 05:00 and 09:30-travel to indoor shoot which will be done between 11:00 and 15:00, travel to location for the 16:00 to 19:30 shoot. Mind you, I live in a tropical latitude, where we get, an even 12 hours of day and night lighting conditions. So you may adapt your timing as you see fit.

These two words face us with a great challenge. Get far and take some pictures, start to get closer and do some more, get right up to an specific object and make sure, that the end photo, tie up with the rest of the sequences, to tell a story. As the object of my work was on tourism (travel destinations reports) I will use the archives  of this production as the subject of this article. 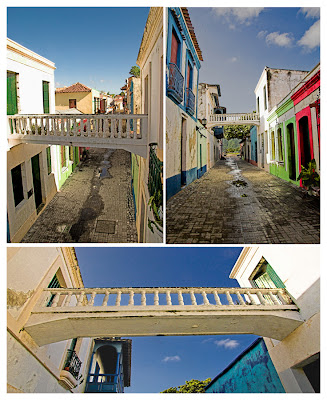 THE HOUSE WITH A BRIDGE

The Herrera's House is "THE HOUSE" that defines the colonial period of the port.
Los Lanceros street and its colonial architecture are the contex, and the bridge and small detail on the facades of the houses are the objects.

Here, two houses conected by a bridge can be a story on their own. One of the houses was the family's commercial front, and the other, their living quarters. Why would they need to build a bridge to connect them above a road failed my imagination, no one has been able to give me the story. However, the bridge is one of the most photographed sites of the city.

The facades of the houses and the details on them tell stories as well. Some of the homes are up to three stories high. Specially, those that did not have the privilege to be in the ocean front of the port where the breeze would keep the humidity and tropical temperatures more livable. 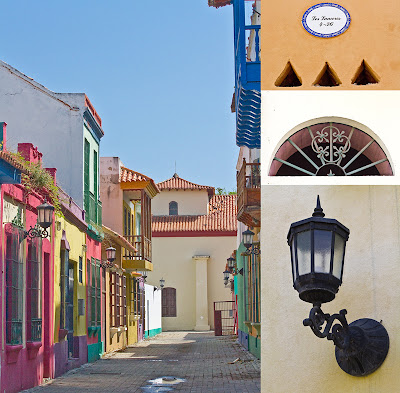 The small holes on the side of houses helped with cross ventilation and if you
take a closer look at sunrise shaped vents, they would indeed allow you to see
the Royal believe that all routes (sun rays) led to the same place...the Royal Crown's properties. Some would argue, that the sunrise emblem belonged to people of the Order of Santiago, however, that is another story. As far as the street lamp, well, they were oil lamps during colonial times, but city ordinances helped, by forcing the new dwellers, in trying to keep the decor as close as it was in old times. So CONTEXT and OBJECT are great subjects to tell a story.

DAY AND NIGHT SET THE MOOD

A street corner family store tell us a story. The world economic trance that most countries are facing has led to changes in people's life. Thus, some local families are using makeshift stores to make ends meet. Reclicled plant pots and a hand made store sign are taleteller signs of today's life styles. The lone dog on the run is seeking whoever is willing to take him home or it will have to raid garbage cages to get some food for the night. 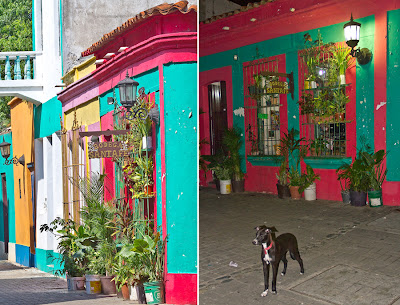 PAY ATTENTION TO THE DETAILS

Since these houses were built in the between the late 1500's and 1600's they hold plenty stories to tell, but the records of this city are somewhat difficult to get. However, the first historical citation dates to the 1811 when it was declared a city.
One most become a time machine, and make an imaginary trip back into time, when electricity did not exist, thus making, everything related to energy very SUN DEPENDANT. So the houses had to have a HOLE/"Interior Patio" to allow sunlight to reach most of its dwellings. The high roofs and three stories floor plans followed common sense. The higher we live the cooler it will be. So one walks into narrow corridors that were open to the sky 30 feet above the ground. The lower levels were for the services, animals and commerce. The upper floors were the actual home or living quarters of the house. Available light in these houses can be tricky to use, however the use of a tripod, a high ISO, and a cable release are enough to get your pictures done. White balance is important, in my case, I like the orange tones that a daylight WB produces while photographing these old houses' interior. As you can see from the pictures a single owner has adapted the patio of three adjacent houses to make up for a 20 room B&B, and it has worked really well. 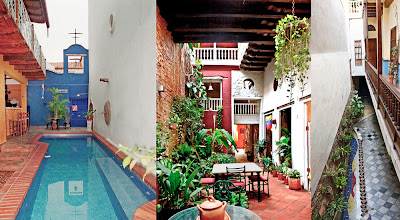 In some of these pictures I have been using multiple takes of the same image
by using the Live View option of the camera to select focusing on different details
of the entire image to get as much as I can in focus. Then, during the processing of the pictures in Photoshop, I use layers stacking to make the panoramic after blending all the photos together. This may seem as an overkill, however, I like the results and I think, this practice will open new venues of creativity for those who use it.

The picture above and the one below were done in this fashion. The one above was framed as a horizontal panorama and the one below, was made in a portrait fashion. Both required multiple overlapping takes of about 25% of overlap between each image at the same exposure. The camera and lens have to be set to manual, to keep the exposure values and and the focus as you need it. I start and finish each sequence with a picture of my hand in order to know where a series starts and ends. Before stacking the pictures into a single frame, one most process them in Camera Raw, where one has to apply the same values for all the pictures (Yes, I shoot all my picts in RAW). After processing the pictures in 16 bits, for maximum color rendition,  one can use the TOOLS menu in Bridge to go into PHOTOSHOP-LOAD FILES INTO PHOTOSHOP LAYERS, and then, proceed to EDIT to align and blend the images together, to get the desired result. 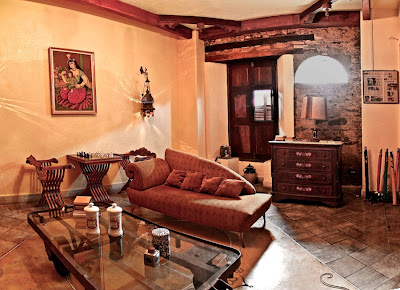 To understand what living in a three story house without electricity 400 years ago takes a bit of imagination. Contrasting pictures of the same object help telling the story. 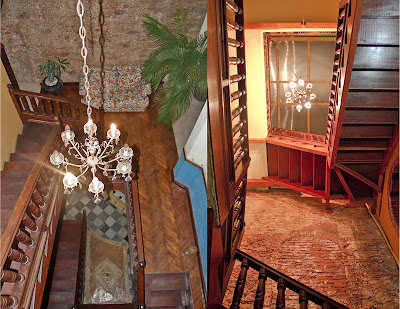 Here are two photos of the same stairs, both were taken at night with the help of a flash. I wanted to highlight the hight and depth of the site. Each level is nearly 6 meters high, and the winding stairs played an important role in making one feel the real life experience of walking up and down them day and night.

The highest point in these colonial houses may be up 3 stories high. By been high up, and close to the roof opening, the living quarters helped their owners bear the strains the environment presented them every day. Even now, the images do not give a hint, on how difficult living here could be without modern times services.

So, paying attention to context and object, thinking in digital, using all the digital technology provide us and making it work for you are just a few the great feats a digital camera adventure can provide to today's photographers.

For Expats living in Venezuela who may want to enjoy a visit to this port city and
its near by beaches look into the following:

www.posadasantamargarita.com.ve
or call them at: