The composite you see below is the result of using a simple matte-black cardboard to attain an image that would require a lengthy workflow to separate these beautiful flowers from their surroundings. 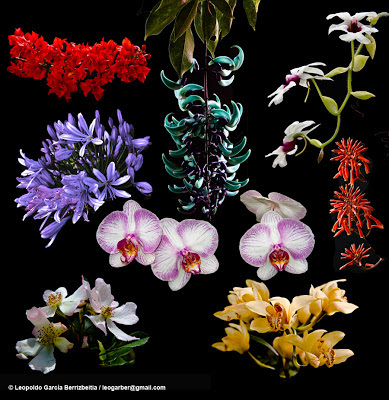 These red caladium lilies in the picture below, have a fence in the background that is quite disturbing. So one is forced to take a picture, in an angle, that will enable us, to do away with the fence in post production. 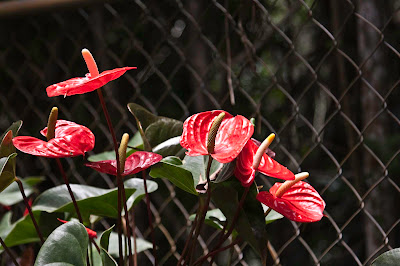 Here is, where thinking in digital, comes in handy before taking a picture. Use shadows or dark backgrounds to separate your object from distracting surroundings. How do you do this? By making a slightly over exposed image of your subject. This will make the backgroung more apparent and as a nusiance, but you want that! Because, once you process the image with your editing software, you could make the fence disapear. Here is how: 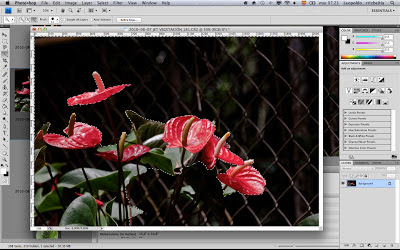 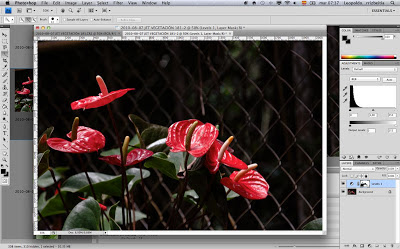 3) Crop the photo to your desired size, and you will end up with the picture below.

Its fair to say, that working with Camera Raw and Photoshop for a large set of photos can be time consuming. As I am a freelancer on a retainer contract and this gives me some latitude, that some may not have in the editorial/documentary work world. However, if you have the time, USE IT. 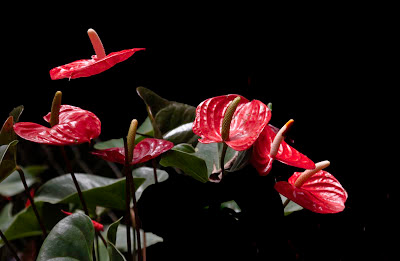 WORKING AROUND THE FENCE

There are many ways to get around a wired fence. One may remove it, get it out of the picture, move the plant and its flowers (as long as it is potted) to another set, use the shadow/over exposed technique or buy a matte-black cardboard or a piece of cloth, to place in between your picture and its otherwise disturbing background.

I know, that there is nothing disturbing about a blooming Green Jade Vine, but the fact is, that it is an endangered vine from the Island of Mindanao in the Phillipines, whose beauty, is one of the reasons for its demise. So when one  needs to make a photo of a single raceme of flowers for a publication, the beauty of the vine as a whole, becomes a challenge. However, natural light, a matte-black cardboard, a kind passer bye, and wonderful light can help to get your job done. 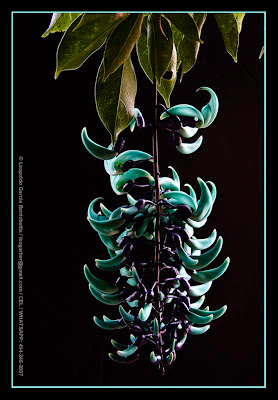 Walking around the flowers gives you a feeeling of how the light looks, where are the best highlights, shadows and midtones that will be determinant for the placement of the black cardboard to get the best results. Vines tend to grow upwards, and to a standing photographer, reaching the areas where they make the horizontal turn can be difficult. However, one needs to have horizontal an vertical images for editorial reasons, thus one most make an effort to get the shots the client may need. 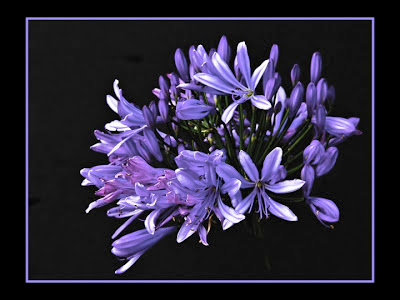 As a photonaturalist, I seek the reasons behind beauty with my photography. They need to become evidence of a story in the making. However, in the seduction game between plants and their pollinators, most of us miss out the the important facts that color, fragrance, and flower architecture are there, for the sole purpose, of aiding their pollinators to help them with reproduction. Most of the time, beauty stands out, and purpose remains a secret, however, no one says they have to be separated. The African Lily  grows out in an umbel shaped mode of flowers. They do not open their buds all at once, so one may find different flower stages in a single umbel. As these lilies are hardy in most soils, they are used very often, in floral gardens among other plants. So the black background is a wonderful way to single them out. The long flower stalks of these lilies allowed for a vertical black cardboard placement, so a single umbel could be framed. This enbled a proper separation between the sugject and its background and the beauty and form of these flowers becomes a statement.

NOTE: If you are in a botanical garden or a public park using a backdrop can be hard and even illegal, so make sure you have permition to do your picture taking or that this sort of activity is allowed where you plan your shoot. 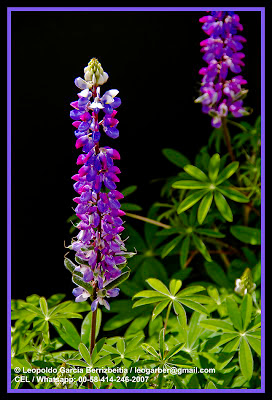 To photograph the lupines above and the Wild Rose below, I placed the black cardboard diagonally. In the former picture, it helped me align the composition from left to right, making a single lupine stand out. 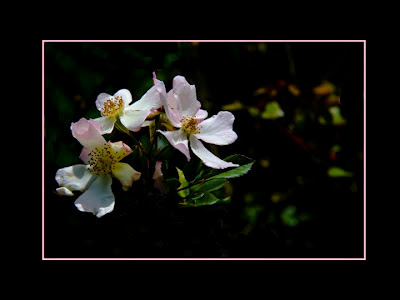 In the wild rose picture above, the black cardboard was placed halfway from left to right in order to allow a view of the background that gave depth to the image. 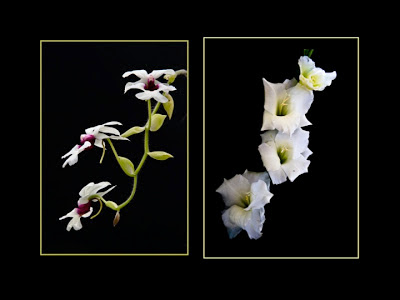 Top and side diffused lights with black backgrounds really bring out the delicate petals of white blooms, by placing the black cardboard, far from the flowers. The orchid flowers in the left, had the light coming, almost straight down from the top of the greenhouse, as it is difficult to get good details in overexposed white objects, one should under expose the image until one can attain the desired details. Tiny shadows,  faint dark lines, or anything that gives any kind of texture should be emphasized. The Gladiolus Lily was a in a flower arrangement with many other white flowers, the exibit was  outdoors and it was late in the afternoon. Here, moving around the arrangement, singling out a diagonal stalk that had nice natural ligt on it, and placing just a small portion of the black cardboard, did the trick. 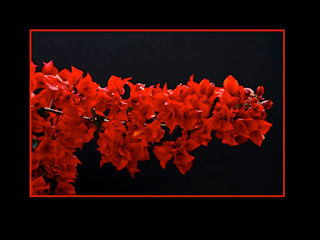 Some tropical vines are huge and the Bounganvilias easily fall into this category. Here, everything was straight foward, the light was right, the plant was very accesible, a branch was reaching out and the black cardboard could be use to separe this part of the plant from the bulk it made in the garden. 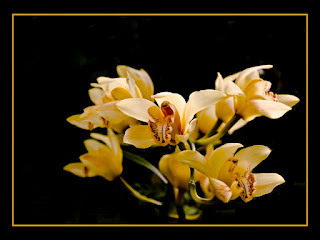 A white roofed greenhouse is a huge diffuser, however, how it is located, with respect to the sun, can play an important role on how the light is reflected through it. Ours is facing north, so cool loving tropical plants are placed in the east part of the green house, and those that need a bit more heat are placed in the western side of the place. The Cimbidium orchids come from tropical Asia and southern China. They were displayed in a group of different species, but the yellow had a back light that made the central flower stand out. Here, the black cardboard worked really well, as the lip of the orchid with its red dots and midline, could be seen well enough by using available light. 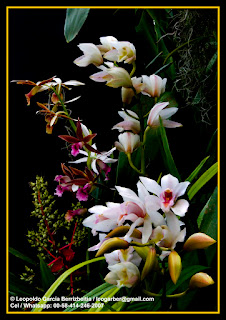 Finally, the same set up was used, to photograph the Asian Orchid Collection on display. However, the image is made up by seveveral pictures stacked together with Photoshop. The black cardboard was set up far back from the orchids, then the angle of the camera was set, so the photo could include as many orchids as possible, the exposure was set to manual, then, using Live View to focus on individual flowers, several frames were shot focusing on each flower from the foreground to the back. All the photos were taken in RAW and processed with Camera Raw using the same values for the bunch, once that was done, the photos were stacked together, using the Layers tools in PS where they were alingned and blended together to make the final image.

Matte colored cardboard are light and cheap to work with.

Choose your subject well and then deside what backdrop to use for your images.

If you will use available light, study how it lands on your subject and then take the photos.

Separating subjects from their backgrounds, places them, as what is important in the photo.

A little over exposure works well to get the dark blacks in the background once you edit and work on your files.


Backdrops reduce the workflow time requiered to separate subjects from their background and they do no need to be expensive brand backdrops to get the job done.

Be careful in how you work your scene, try not to damage the flowers or exhibits.

Have fun experimenting with props that help you improve your photography.

ALL THESE PHOTO WERE TAKEN AT JARDINES ECOLÓGICOS TOPOTEPUY 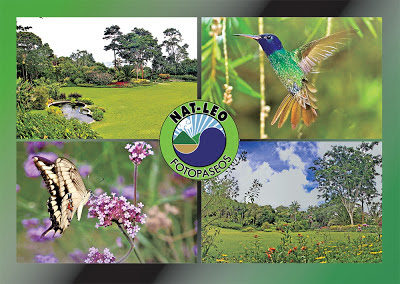 Thanks for sharing this information.