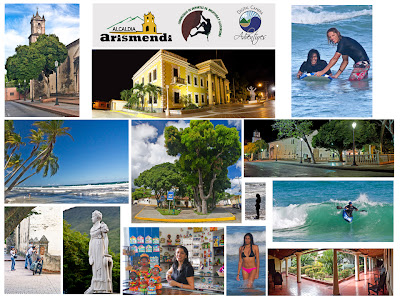 Its been quite some time since I used a Kayak. It started long ago at the Hillsborough River Park, in north Tampa, Florida. My reason to learn how to paddle a kayak was to explore the Florida rivers and waterways, to photograph wildlife and nature. This kind of boat was godsend, as it was quiet, stealthy and it could navigate very fast and with little effort over 10 inches of water. Another great thing about a kayak was that I did not need a partner to cruise around, as I would  to efficiently paddle a canoe . Needless to say, paddling a kayak can get you to some unique places in nature. However, I've never dreamed how these boats would evolve over the years, and after using them in the US, I used it in Venezuela on some of its coastal lagoons and rivers, unil it was stolen after 10 years of use.

Now, there are all kinds of kayaks, some are for long trips in oceanic waters, others for flat inland waters and rivers cruises, some people use them for white waters and some extreme sports lovers, dare navigating down waterfalls, in what most of us would judge, as an insane sport. Well, this article is about a white water and extreme kayaker who has done some very wild things in the Lost World region of Canaima National Park in Venezuela and currently runs a white water tour operating in Barinas state.

The Photoshoot was a random thing. It was not planned, and it happened during a recent trip to Margaria Island, where I was to give a workshop, on how to use photography to promote tourism in social networks. As it turned out, one of the speakers in the event was an extreme sports, safety instructor, and tour operator Alejandro Buzzo. He needed some pictures to promote his workshops and I had taken my equipment with me to the island. So one thing led to the other, and the resuslt was: I was to photograph Alex using a white water kayak to run waves! This was a Great subject for Digital Camera Adventures and a new photo experience for me to share with you.

As my gear was for land use, I needed to get as close as my camera and lenses would allow, while staying dry from the breaking waves during the shoot. And Alex needed a beach with waves high enough to demonstrate his skills and the  versatility of a white water kayak to run the waves. I needed a chrash course on Kayak figure making, 180s, helicopters, esquimo roll, the parts of a white water kayak and what to look for during the action shots in order to make the shoot as good as the conditions allowed.

I used a 70-300 f/3.5-5,6 zoom for most of the shoot. The camera was a Canon EOS 7D.The shutter was set at H, the focus to AI and the camera ISO was set at 400. All the photos were shot in RAW. During this job, I followed the instructions of an action photojournalist with whom I worked on a previous shoot. He recomended the following: Its best to edit each photo series in the camera, erasing the pictures that did not come out well. At times, when 3 or more pictures of a series do not come out as needed, it is best to erase the whole set, unless you've got a shot that is outsanding. Yes, It consumes battery, but saves pos-production time,and when you just a a few shooting hours out of a 4  day workshop program, every minute in a workflow counts. Furthermore, as a Canon owner here is a little trade secret that he shared with me. In Canon cameras, that have the AF-ON button on the back of the body, one can use it in conjunction with the shutter buton to shoot action series really well.First, one most set the camera focus to AI. Then, as one presses the AF-On button located at the top right backside of some EOS cameras, simultaneously, with the regular shutter. One can take as many in focus photos as your buffer will allow. The lag associated for the regular shutter trying to maintain the image in focus, is reduce to zero with this tecnique. This allows for a larger number of keepers in the action series. Try it, it really works!

There was a beach about ten minutes away from our lodge. So we got up to an early start to see if it would work for our shoot. The cool morning and slow winds were good enough for a few hours of work, as we had to be in the auditorium in three hours. This beach was in the winward part of the island, however, the winds were not bad since it was early in the morning. It was safe to work without worrying about sea spray and sand getting into the cameras. The coast had a sandy bottom and no underwater surprises for Alex. The beach had a jetty that enable me to go into the surf without risking my equipment. So, as I got the camera ready, Alex worked his way paddling out to where the waves were more promising.

The satellite picture from Google Earth comes handy to explain the location, for those of you, that do not know where Margarita Island is. Its location is in the north eastern coast of Venezuela's Caribbean coast. The arrow points out our location on the windward side of the island, where the Northeast Trade Winds hit the islang broadside all year round. 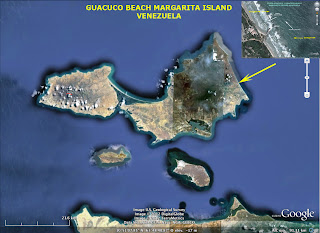 The picture below is of Guacuco Beach, where our shoot took place. The position of the sun, direction of the ocean currents and waves and the time of the day, we chose to take the pictures, had a role in our equation, as these conditions always have an effect on the scenario where the action was going to take place. If you do not have time to scout your location, its best to talk to the locals and use the next best thing to gather info of far away places, in our case, Google Earth. You can research the net the night before, get the time of sunrise, the weather and tides info, all of which will make you have some foresight on the geographical location of your shoot and how to prepare yourself for the unexpected. When we got there, it was ovious that the morning sun would proviede us with some beautiful backlit pictures on the south east of the beach, while in the northeast part, the jetty would have a beautiful low fill light to highlight the colors of the waves and the ocean water.

It was early morning and the waves were small, as the winds had not picked up speed from the hot tropical sun, but they were good enough, for Alex to show us how a white water Kayak is used to ride them. So we started to work. We had no communiations, therefore, I had to guess, what would be the next move he was going to do, and I was lucky to get e few sets of pictures to tell the story.

When photographing an objective that we are not familiar with, it is best to learn the most about it. However, if we happen to be an unplanned thing, that is happening at the right time at the right moment, and our knowledge on the subject is limited, well, it is possible to use common sence and allow ourselves to make the most out of the experience. 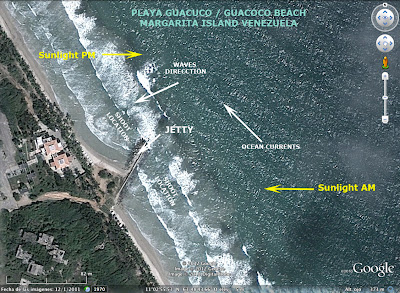 The photo below was taken from the jetty in the north part of the beach with the sun on my back. Here all the colors of the water were in view. The shades of greens and blue contrasting with the white crest of the waves are very pleasant to the viewer. 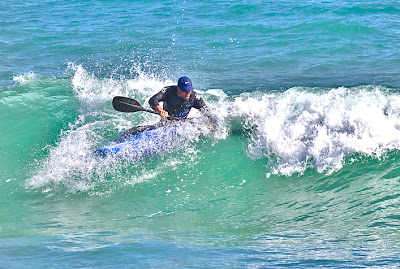 The next photo was taken from the jetty right into the sun. The kayak coming through the wave is enhanced by the white water, and most of the blues and greens of the water, are reduced to a minimum. 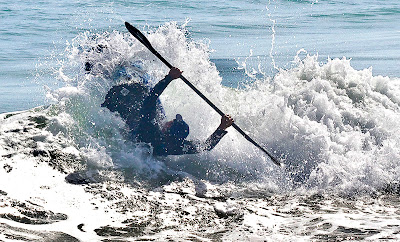 Bellow, the siluette of the lady surfer, watching Alex running the waves, is framed by an excess of sunlit waters, that turns most colours into high contrasting whites and shades of bluegreen. The two tones bring the girl's profile in detail making an interesting image. These three photographs show, how a turn of the camera into or away from the sun, while one stands in the same spot (the jetty) allows you, to get very different results. 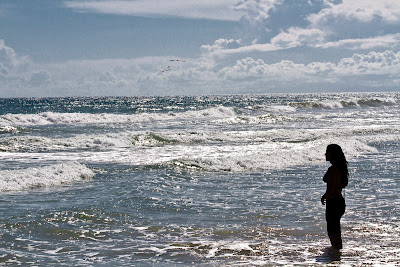 Photographing the surf can be easy, if we can learn to determine how the waves will break, get an idea of the frequency that the kayakers choose to ride them, and plan ahead when to start the sequence. I feel, that the photographer's intuition plays an important role on desiding where to do his work, when to do it, and choosing the right moment when to take your shot.However, nothing beats getting to know your subject. 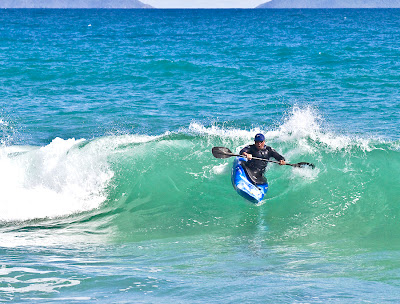 When the object is too far for the lenses, knowing the crop factor and the amount of cropping you can push the images in post processing can be a good thing. I know that a lot of professional surf photgraphers use lenses that range from 400 to 600 mm to take their photos from the beach. Well, that is a big budget in camera gear, and some of us do not have that kind of money. Thus, one has to make do with what you have. So knowing, how to circurvent our limitations is the creative way to go. 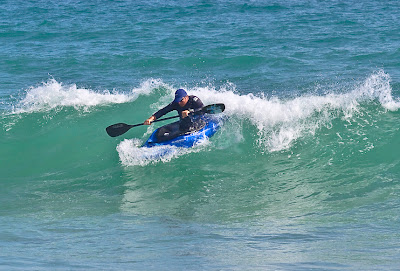 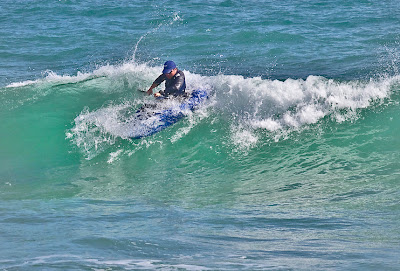 Alex paddles hard to go over the crest of the wave and the kayak splashes, as the left paddle is sumerged to steer and use the required leverage to make a sharp turn. 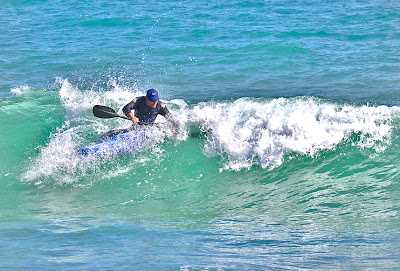 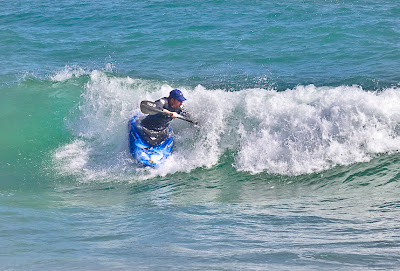 Once the turn is completed the wave, chrashes down, but Alex remains on top as
he would in the rapids of a river. 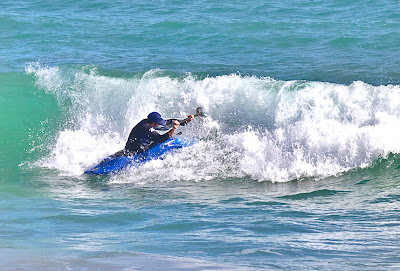 Staying on top requieres both upper strength and fast hip movements to go through the wave and wait for the next one. 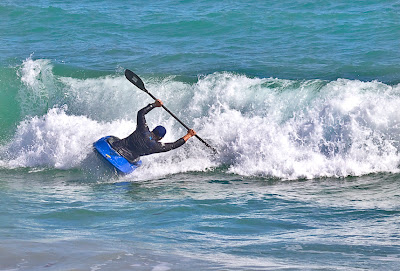 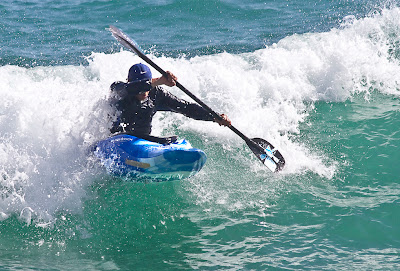 In this series, half the kayak is in the air as it is steered towards the white water. 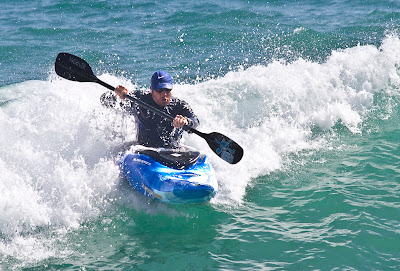 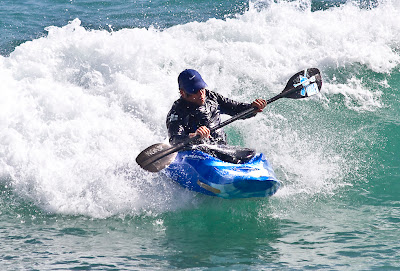 Here Alex is preparing to do a spin by sinking the froont end of the kayak into  the wave. 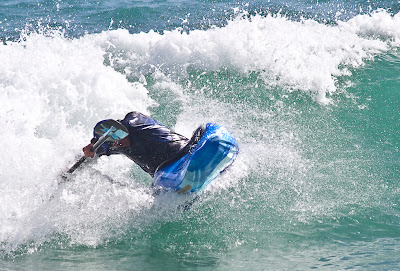 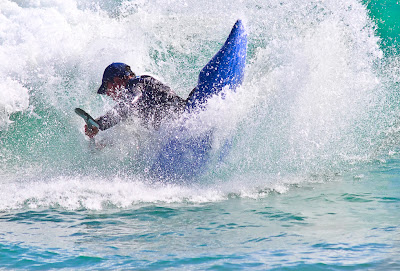 However, the wave overturns him and this, does not seem to disturb him! 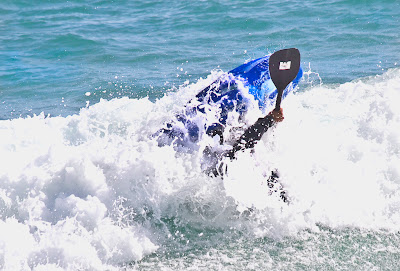 He goes into an Esquimo Roll, and it is just part of the fun. Mind you that when you are upside down, in the bottom you are surfing on is a coral reef or a rocky ledge, you will have to include in the equation a lot more than most. 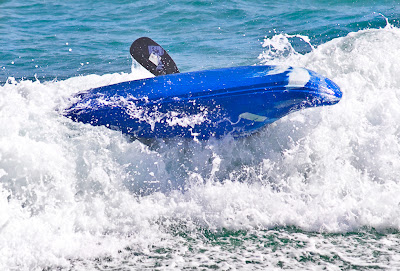 Once, the kayaker has hone on his skills in white water rivers, it seems that running waves with a kayak may be a lot of fun. 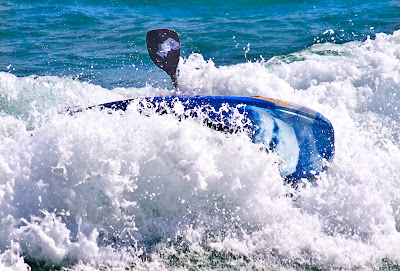 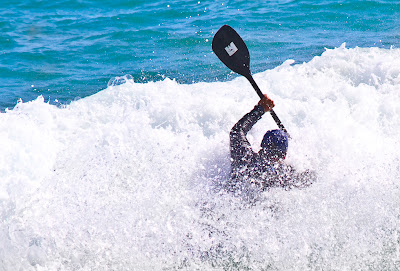 Well I hope you enjoyed this article and keep in touch for more photo adventures in Margarita Island Venezuela.

These photo adventures were done with the support of the Arismendi Especial Events Office and its Tourism Bureu in conjunction with Digital Camera Aventures.