A Swallow over the Rapids 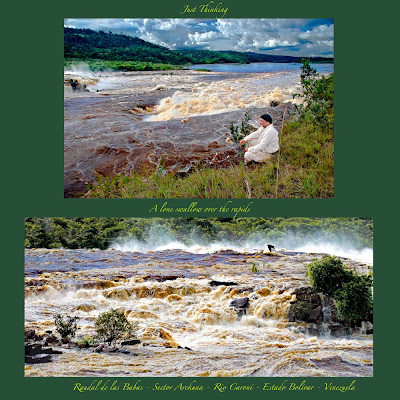 
The roaring of the Caroni river urged me to sit down and admire what was before my eyes, a break in the ancestral mother rock that makes the river bed a fifteen foot drop. This changes, an otherwise reflection of the skies on a watery mirror, into a turbulent fury of dark whirlpools, that swallow everything into their visceral hollows. It is here, where Wiyu, the Rainbow Anaconda, queen of all the waters, patiently waits for the unaware to fall into her merciless coils, just to be swallowed, as many others who had venture too close to her realm.

Suddenly, a barn swallow flies bye, I recognize its flight and shape, now there is a formidable creature. It has arrived to the Lost World after crossing most of the boreal region and the Caribbean. Now, it flies right over Wiyu’s realm, as it knows, it is out of reach of the traps set by the lady of the deep. It skims over the water for a drink and to clean its feathers after a long trip. Her audacity comes from self-respect after conquering so many things during her arduous flight. In fact, she and her ancestors have flown long before man ruled the earth. I think her attitude is well deserved and I watch her do her thing.

I remain in and endless gaze, deep within my thoughts as the swallow’s kin call from high above. They are on their way to Angel Falls, a route where they will have to challenge the winds of Devil’s Canyon, those winds that roar YAUYAN making the world’s highest waterfall a veil. Their sound is the voice of the jaguar, lord of the jungles, the mystical force that light and shadows hide from its victims eyes. Lost within my thoughts, I realized, that only a few can see what I can, or are even interested in seen it, and how important is to understand this. In fact, I ask myself what is it that others see that I can’t? However, I know that thoughts die where they are born unless they transcend into actions that other may see and feel.

Further down the river, the flow of water stops. The river cannot impose its will any longer; Wiyu cannot live there any more, a huge lake lies on the river`s path. The Lord of the Night lost his place as well, as the shaddows and light are harnessed by Kanaimo, the evil spirit of the forest, who works under the guise of man. Here Kanaimo rules, he and his subjects built a huge wall to stop the river`s running waters. Now Kanaimo places little suns all over the land when the moon comes out and the river roars at Kanaimo’s will. Kanaimo created a new word, which his subjects call electrification, a word that the ancestors of the Pemon and Yeakuana, who gave the land where they lived their name, had never heard before.

I remained sited at the rivers edge, the swallow chirped good bye to Wiyu in her roaring empire, she joined her kin to their flight south to see Patagonia and the Andes, lands that made up its ancestors stories. I know and envy what its eyes will see… things I never will. That is why I say to myself, it doesn’t matter what others can see, as long as who sees this is ME (I).